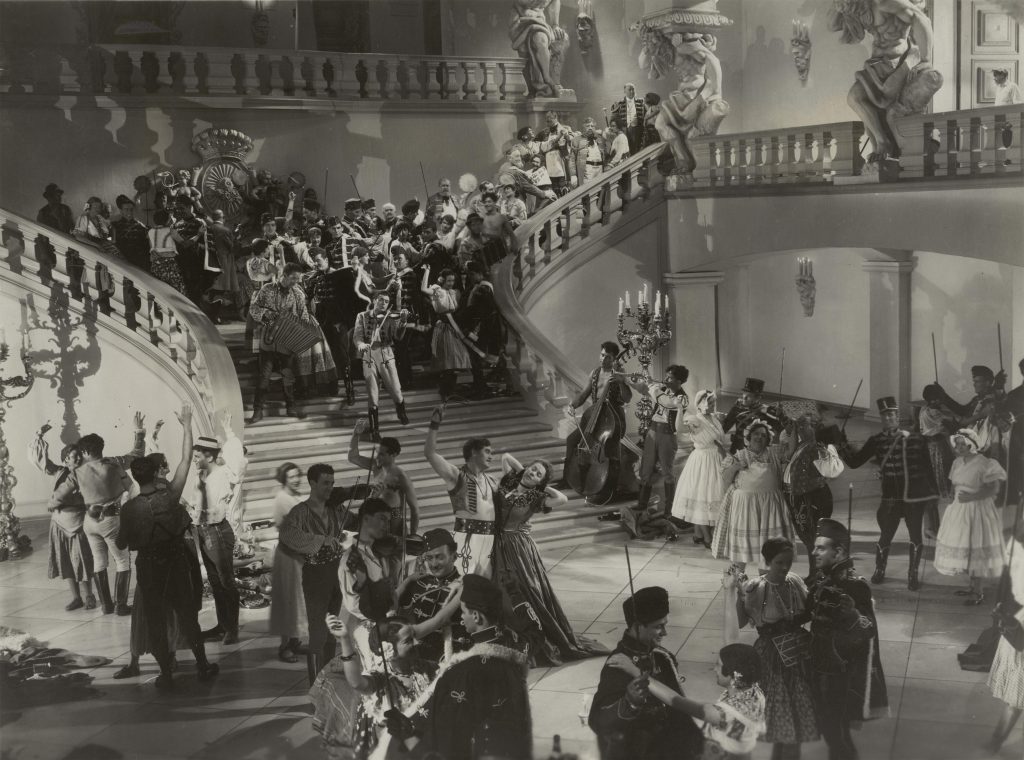 In 1934, Fox Film Corporation releases Caravan, a musical film directed by Erik Charell. On her twenty-first birthday, countess Wilma travels to Hungary, to the house where she had spent her childhood, to claim her inheritance. At this time of the year, life at the villa orbits around the vineyard and the harvest, an activity which relies on the conjunct work of the villagers and of some superstitious practices, the most important being the aid of the gypsies, whose music will make the difference in the final outcome.

A scene depicting a welcoming tasting of the house’s fines wines offers a laugh over the thirst of the characters we just met, because alcoholism is hilarious. At this moment, gypsies’ music captures the attention of the duchess, who is mesmerized by the melody of Latzi’s violin. The consultation of the will follows, but there’s a catch: Wilma will need to get married before midnight, or else she will lose everything. After the ever so generous offer of Baron von Tokay to give his own nephew’s hand in marriage, Wilma, though not as strategic such as incline to objection to authority, turns the table on the man and proceeds to ask Latzi to marry her on the spot.

Lt. von Tokay, the Baron’s nephew will make his entrance later on, not presenting himself as the most charming of men, but more like an attractive and slightly-drunk womanizer. Severely drunk, actually. Because alcoholism is hilarious. Wilma surely stands at the start of the movie as a very smart woman, who reads her contracts and interacts with people as a friend, with kindness and glee, which makes her lovable. That said, her impulsiveness accompanies her through the events of the day with a naivety that doesn’t let her decisions take long lasting paths.

“Don’t worry, it’s only society” Wilma says to Latzi, referring to the guests of her birthday (and now wedding) party. When “society” gets outraged by the union and leaves the house, she then decides to invite in the gypsies, so that they will still be able to have “a real party”.

Sadly, most these characters only stand out as a reinforcement of those that seem to be the immortal stereotypes attributed to the gypsy community. Latzi seems to be the only one to truly stand out, as for when he decides to buy Wilma a gypsy attire she wished for with his own money. Even if the change from her aristocratic wear might just be like playing dress-up to her, being accepting and welcoming isn’t. She doesn’t care about people’s thoughts, and values her own freedom. On this train of thought, she also isn’t too hard on herself when she decides to break the wedding vows the day after. Doing so, she gives up all her fortune to be free.

Her final choice (no longer influenced by the circumstances) to be with Lt. von Tokay appears controversial and wasn’t warmly accepted by American’s audience at the time of the release. Which is comprehensible, as the character doesn’t give the audience many reasons to be considered likable. Maybe he would, after a drink. Because alcoholism is hilarious.