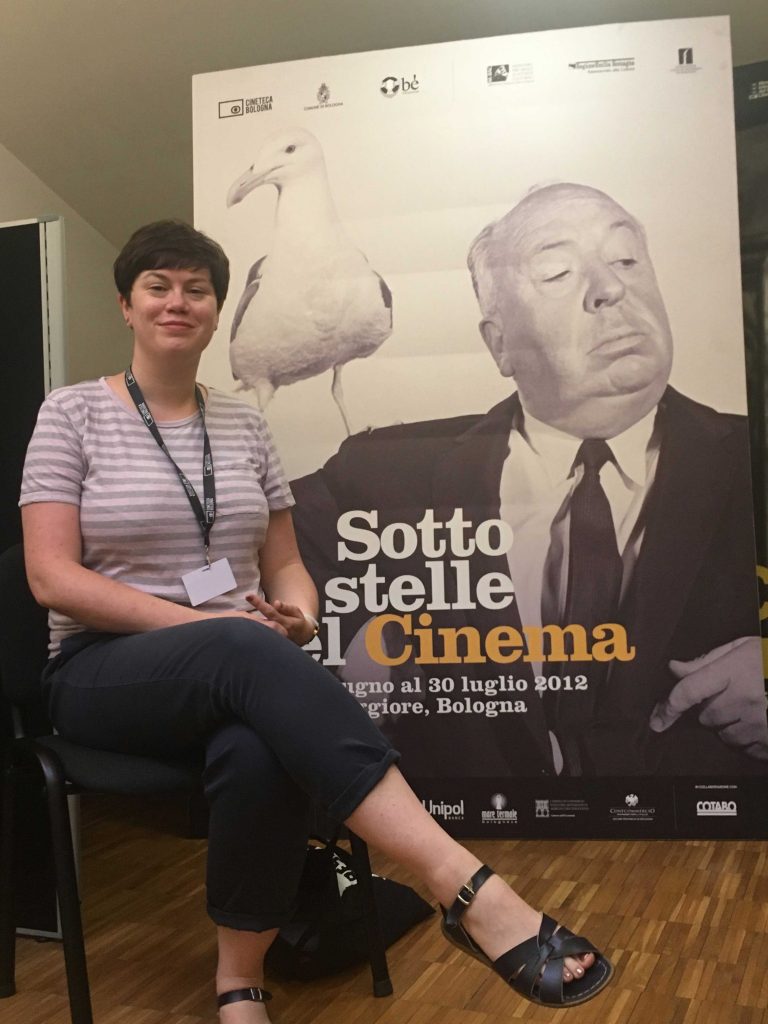 This isn’t Pamela Hutchinson’s first time at the rodeo. Her first visit to Il Cinema Ritrovato was in 2013. “I told myself I couldn’t really keep coming back because it wasn’t purely a silent film festival”, she admits, “but that resolve didn’t last very long and I have been back virtually every year since.” Hutchinson describes how she fell in love with the festival, which she refers to as “absolutely essential… a real kind of refresher in the middle of the year for the archive film world”.

So much so that earlier this year she wrote a rallying article on her blog, SilentLondon.co.uk, on how to really live the festival, with useful tips for first-time festival goers and silent film hunters. “I don’t think Cinema Ritrovato has this problem but some film festival seem a little bit opaque to outsiders” she explains, “but these festivals are for everyone: they are so enjoyable, we should all be welcoming new people.”

The blog has always aimed to provide useful resources for navigating the silent film scene. “When I started it in 2010, it was a purely listings for silent films in London” she recalls, “I realised there was quite a bit going on and it was difficult to keep track of it all, so if you were a silent film fan in London you might miss things.” Soon, the amount of events ‘exploded’ and although the blog is no longer a single city listings site, it looks beyond London, covering global film events including in Bristol (recently named UNESCO City of Film), Pordenone, Bologna and San Francisco.

These events, according to Hutchinson, are fuelling a growing passion for silent film among a younger generation too, who are hungry to sample new experiences and are by no means put off by old or foreign films. “If you go and see a silent film now you are going to see it beautifully presented with great live music, you are not going to have anyone treating it like an antique.

One such film currently screening in cinemas in the UK is the recently restored Pandora’s Box, which as Deborah Ross wrote in The Spectator is “ninety years old and still feels as fresh as a daisy.” In 2017 Hutchinson’s book on G. W. Pabst’s 1929 film was published by BFI Film Classic. “This was a really fun project” she says, “I wanted to not necessarily challenge but really explore some of the things that we knew about the film. It’s a really unusual film in that most of what we know about it is from the testimony of the lead actress, not the director.” Louise Brooks, who became one of the greatest characters in film history, was in her early twenties when she starred in the film. “It’s kind of a feminist reading of the film as well - I don’t know how you could avoid that with a character like Lulu.”

A feminist reading may also be applied to the films of John M. Stahl, who Hutchinson has previously referred to as “a master of melodrama who directed films with strong, passionate heroines.” Il Cinema Ritrovato this year includes the strand ‘Immortal Imitations: The Cinema of John M. Stahl’, which Hutchinson flags up as not-to-be-missed. “We mostly know this director because a lot of his films were remade by someone else. Of course that should tell you that his films are worth looking at in the first place. I am really delighted that I got to introduce Woman Under Oath which is the only silent film showing in this strand, so it’s a little taster of what you’ll get to see in his silent period.” For a thorough introduction to this filmmaker Hutchinson also recommends ‘The Call of the Heart’, edited by Charles Barr and Bruce Babington and coming out in October.

From the woman in Stahl’s fictional criminal jury, to the one serving for the first time on the Cinema Ritrovato - DVD Awards jury. Hutchinson recounts opening the four boxes containing copies the 2018 finalists: “It is actually quite heartening, there are so many beautifully designed and inventively packaged films out there. People are really pushing the envelope when it comes to DVD and Bluray extras these days, such as video essays, plus some of the restorations that we are seeing are really incredible. It was a real joy to have a little voyage through world cinema watching these films. Seeing the work that the labels had put in is impressive - they are presenting them with love”.