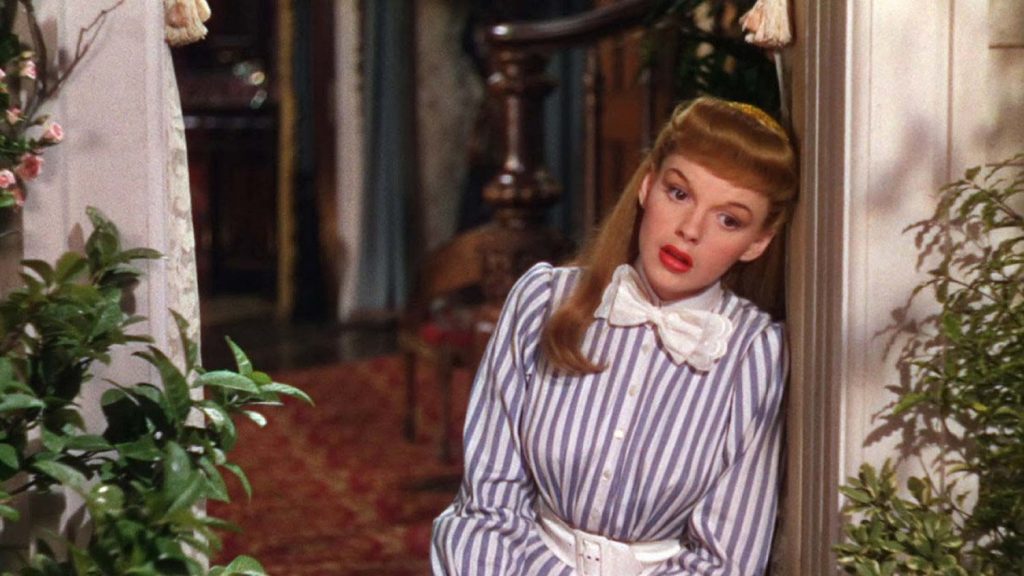 Released on Thanksgiving day in 1944, Meet me in St Louis tells the happenings in the eventful year of a well-set middle-class family in a bright, residential corner of Missouri. It could be easy to tell this story through the songs that made it part of musical history, which are the kind we know even before knowing where they’re from.

In all its radiance, the atmosphere is not as polished as what we’re often given with technicolor movies. It is slightly messy in a fresh, comfortable way. Costume design, together with home décor, makes the mood a bit more colorful than what an exact reproduction of 1903 fashion would look like, borrowing cuts, lengts and prints from the ‘40s. It’s a fuzzy chiffon fantasy which winks at the “vintage remake” trend that can be found today in the streets of Tokyo. With too many bows, lace and pictures, the set succeed not to look like a set.

Somehow, it makes us feel at home. Together with this look at the future, we also notice glimpses of the 1800s, with a shot which is an almost exact replica of Renoir’s Jeunes filles au piano. All of this abundance of details of mixed origins is coherent to the story. In fact, we’re the audience to the telling of a supportive, unite, but also very traditional family, which glances at the future in terms of hopeful plans while holding on to the past, keeping their aspirations strictly conservative (focused on marriage) and politely frightened by change.

On a lower note, we could point out to that that should be recognized as an overused American trope (not at the time, but still): the “Christmas miracle” scene, where the holiday itself seems to play as a deus ex machina through a revelation right before the epilogue, to solve the various unclosed plotlines and conflicts. Though it is a shame, in 1944 it probably it didn’t look as the monster that has been living through decades of Christmas specials.

On the other hand the comedic parts, and we get plenty, are outstandingly funny. Jokes are served one after the other. Esther’s (Judy Garland) juvenile love obsession with “the boy next door” makes us smile at every quirky wide-eyed attempt to flirt. As for the role of Tootie, Margaret O’Brien gives a brilliant performance and her lines, at times slightly disturbing, are delivered with a flare that make her the perfect Wednesday Addams’s colorful lost cousin.

Even when it doesn’t want to be funny, it just is! It’s cool. As cool as a cucumber.