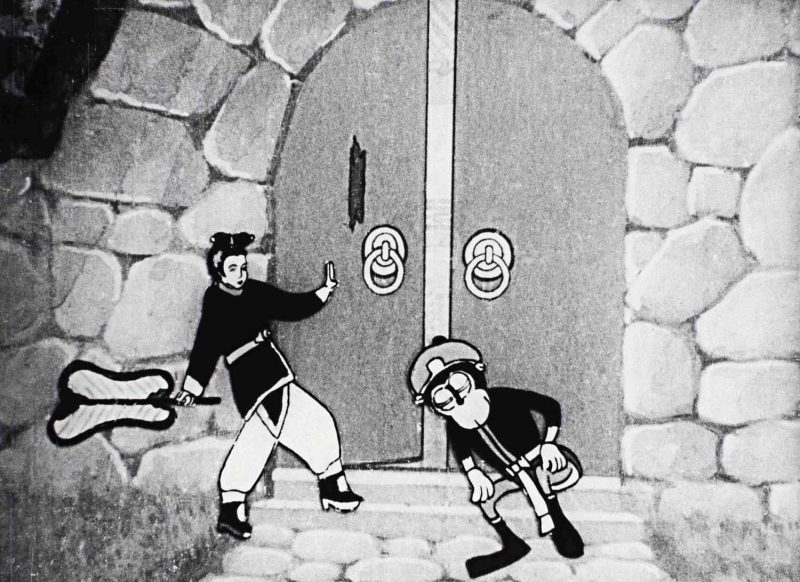 Tieshan gongzhu is known to be the first Chinese animated feature film and is treasured as such by the CDCC in Paris. It was realized in Shangai during WWII, during the Japanese occupation. The conflict had been going on for decades and also had led to the Rape of Nanjing in 1936. Wan Guchan and Wan Laiming, the directors, wanted to make the movie to be a contribution to the resistance. “Seeing an apolitical story used for a political issue is an artistic approach that has been used and is used in China to this day” says Tony Rayns during the presentation.

Marie Claire Kuo, historian and sinologist, introduces us to the story, based on Journey to the West, a 16th century Chinese myth attributed to Wu Cheng’en. The journey in question has India as its final destination, where four monks are directed to get the sutras of Buddhism. Although Tripitaka is the protagonist of the story, it’s the other three monks that we get to see in action in this brief adaptation. Sun Wukong, the Monkey King, brave and smart; Zhu Bajie, the Monk Pig, greedy and unmannerly; Sha Wujing the most obedient and polite.

During their travel, the four encounter the Fiery Mountain, a volcano, infested by demons. These figures make the political intent of the movie glaring, as they are made to look like Gigaku and Tengu, masks of Japanese origin. To cross the obstacle, the monks will need the aid of the iron fan, a magical object that with just a few whips could cast wind and rain and fight the demons.

The rotogravure technique is largely used and gives to the female characters a naturalistic elegance. When we first see Princess Iron Fan, she’s waking up and it’s there, in the way she stretches, that we can see the recall of Disney’s Snow White the most. After all, it was also because of its success that the Wan brothers were inspired to produce a story which featured a princess.

By today’s standards, we might not see the movie stand to the test of time as fairly as the first Mickey Mouse cartoon (which, to be fair, was realized in totally different conditions and with a significantly larger budget), but there are surely things we cannot ignore. It’s clear from the start that the animation itself is fun. The producers saw the potential of the media and pushed it. One thing in particular has shined: the transformations. Step by step mutations of the character’s bodies made them mold into other shapes (and into each other at times!) in front of our eyes, the whole thing put as a constructive process rather than the surprise costume-change covered in glitter and light that we are used to see in popular animation. From Disney’s Cinderella to Jun’ichi Satō’s Sailor Moon, it is in fact something we’ve learned to love, but could definitely see a good ally in this alternative.

It’s so fine to know that 77 years later we can get to see products of these forerunners just as Tezuka Osamu did, before deciding to become an animator himself.