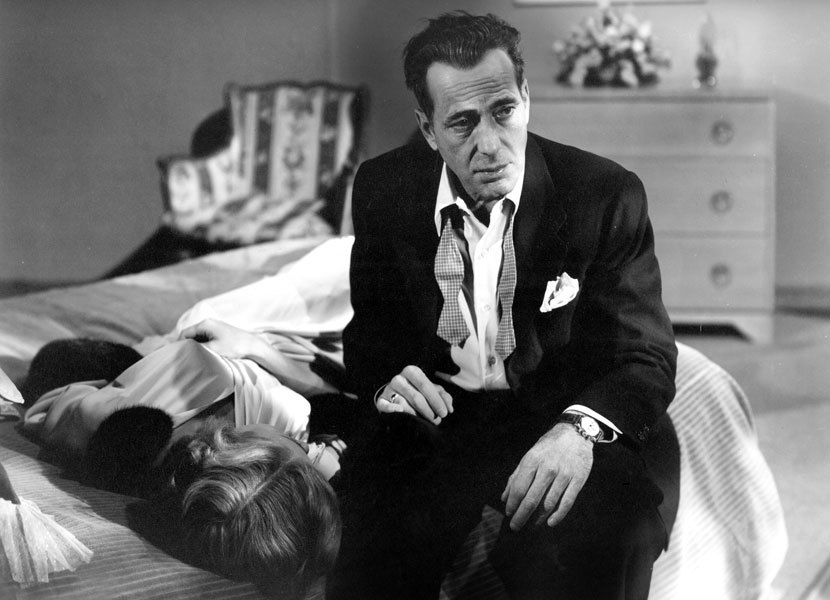 Only five years apart, we get two noir movies intertwined with romance. While in In a Lonely Place we get a classic black and white noir, in the projection of Stahl’s fragile print we get to see the first film of the same genre to be shot in technicolor.

The first is Leave Her to Heaven, in 1945. Richard and Ellen meet on a train. She’s reading his book and is caught by the man’s resemblance with her beloved father. They later find out that they are headed to the same destination and it only takes a few days for the two to get married. In In a lonely place, the neighbors Dixton and Laurel are the star crossed lovers. Richard and Laurel get sucked in these toxic relationships with total willingness and glee. Ellen’s goal is to isolate her partner from other people and consolidate the union on a deeply rooted dependence. “She loves too much” are the words of Ellen’s mother. Which is from a justification.

Ellen’s aggravation is followed by the change in the use of color. While the initial scenery is soft and peaceful, it progressively is replaced by overwhelming patterns in wallpaper and upholstery, meanwhile nature sees a change as well. Both get claustrophobic. The most significant change in Ray’s adaptation is in the change in the body language of the protagonists. It starts out as playful, relaxed and opened, it ends stiff, avoidant and Bogart’s quivering hands are hard to pass unnoticed.

Dix and Ellen impersonate different types of toxicity and violence. We have reservations on these characters, because we mostly see them from the eyes of people who are in love with them. But when it is expressed, we get direct physical violence by Dix and a destructive and revengeful silent rage by Ellen. If Dix is just showing what we already knew about him, which was given to us from the beginning in his record, Ellen’s development follows an hyperbolic road, which starts by the passive non-intervention during an “accident” to cold blooded actively executed acts.

In the end, both are self-destructive and cause a downfall in those they love.