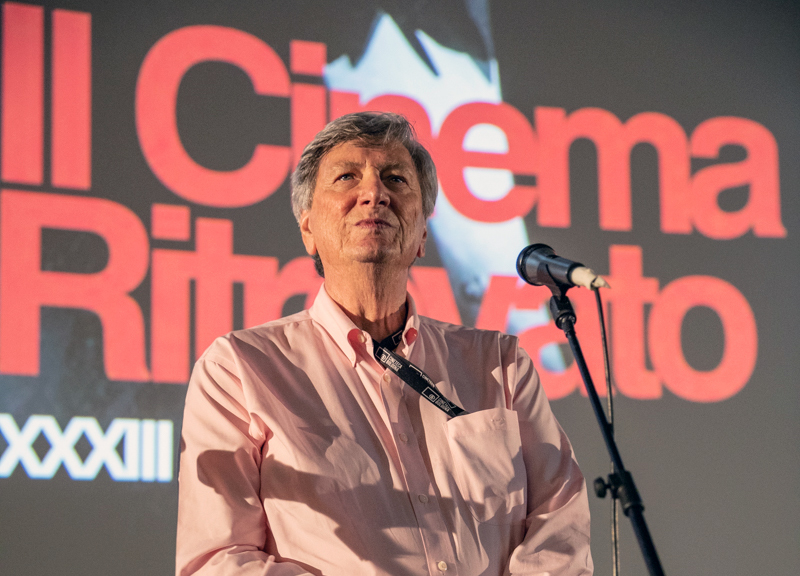 In a recent interview you have stated, as president of the Academy, you have a different perspective compared to former presidents. How's that?

The Academy has 17 branches, and every branch has three governors, most of the branches have actual filmmakers, editors, cinematographers, sound and production design workers that are actually on the set. So, many of the Academy former presidents were executives and producers and their perspective was more focused on finishing: the distribution and exhibition of movies. Instead I refer to my wife and my perspectives, cause we are soldiers in the trenches fighting the war, we are there every day. I have worked on set and I know every detail of making movies during the production. And Carol, my wife, has worked on the editing and knows every detail of the post-production. So our perspective is more intimate, we have much more sense of what it takes to make a movie, the everyday challenges and the struggle. We understand how difficult is to make a movie and the tremendous commitments that take to do it.

Beyond that, you are really involved in the work of preservation of film.

As a camera assistant every day I physically worked with the film and I have realized how delicate and vulnerable the film is, how easy it deteriors and scratches. I was actually photographing movies and the film is vulnerable all the way through, in all the phases of filming. I [respect] the idea of preservation, and it is very important to me. Now, of course, we are moving to the digital age and there are others challenges and dangers in terms of restoration. We all know that digital materials are much more vulnerable. We have seen here, at the festival, hundred year old material properly stored and archived and one can make beautiful digital restoration of them. But, if the original photography is digital it’s very vulnerable. On our computers we all lose files that get corrupted, and if something is corrupted it’s gone, it disappears. We have yet to experience what is going to happen for what they call digital nitrate, that causes digital material to dissolve, we are just at the beginning. In the near future we are going to have movies captured, photographed and edited fully digitally, they’re going to [run the risk] of disappearing, because not all of them, especially low budget movies, have the force of the studios behind them to preserve the material. In the film era a lot of movies just got lost, and after 50, 60 years they got discovered in an archive somewhere and if they were well stored, they’re wonderful to look at.

Talking about that, this year at the festival Refn and Frémaux were guests, which stand on opposite sides of the controversy between movie theater and streaming platform. What's your opinion about that?

As the Academy Board of Governors have decided a month ago, when we had the chance to change the rules of qualification for exhibition times, we are in the middle of such huge changes in terms of how movies are exhibited and distributed. So we have lastly decided not to change the rules. For instance Netflix has started to show more of their movies on theater screens, like Roma, like The Irishman, which is going to come out. On the other side [film] studios are starting their own digital streaming. It’s just a hodgepodge of change, right now. And when you are in the middle of the change it’s hard to have the right perspective. So it’s an impossible question to answer. Anybody who feels they have answers to this controversy or this dilemma I think they’re not being fully informed.

In the same interview, we were referring to earlier, you also said that you're glad Marco Bellocchio joined the Academy.

As a film archivist and preservationist, what you think is the importance of a festival such as Il Cinema Ritrovato?

Last night when I was introducing The Masque of the Red Death I told the audience that this is the most unique festival in the world. It’s not about movie stars or new movies, that are going to be distributed. It is about the heritage and the history of the cinema. We are looking at film that have been restored from archives of the late 19th century. This afternoon my wife and I are going to see a film from 1919, Töten nicht mehr, and after that we are going to see some very short films. At the same time we can see recent films that have been restored. This is very exciting. Yesterday they were showing a technicolor print of Hitchcock’s Under Capricorn, which for most people in the audience was a discovery. This is a film the even Hitchcock didn’t like. But time gives you a different perspective and I think most people in the audience thought that it was a very important film. The acting was really impressive and Jack Cardiff's cinematography was magnificent. Cardiff photographed that after Black Narcissus and The Red Shoes. There is no other festival in the world that is so committed to preservation and archiving but also to rediscover lost and underrated movies.