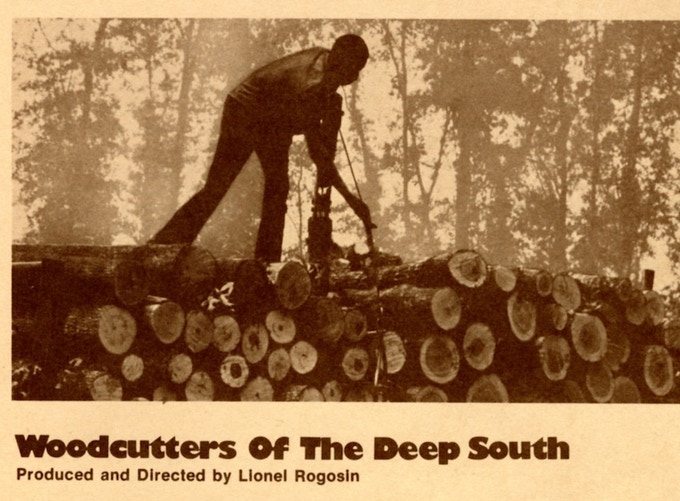 In 1972 I heard a vague rumor from Francis Walters about a unique group that had sprung up near Montgomery, Alabama. It was an organization of black and white sharecroppers who also cut down white pine trees for the paper companies on a freelance basis. Although historically antagonistic to each other they somehow joined together to form a cooperative. This seemed to me to be the ideal subject to illustrate the dynamics of black-and and-white hostility and a very creative attempt to overcome that through mutual cooperation It wasn’t the first time such a thing had happened. After the civil war groups of poor blacks and poor whites had joined together in order to improve their economic conditions, however the white power structure had used the ancient technique of divide and conquer and set the poor whites against the blacks in order to more easily control them. History was against such cooperation at that time, but in post WW2 such a possibility now looked feasible.

The prime mover in this organization was James Simmons who could be described as an independent, redneck farmer of sharecropper origins. He later told me that he was inspired by Martin Luther King Jr. I was never completely sure of what he meant, was it opportunism or benign self-interest. I don't believe that James was an idealist but neither was he a blind racist. Also there were economic forces at work in Alabama, which were depleting the small farmers. Cotton production had been moving further west to Texas for many decades and the number of small farms in Alabama was decreasing as well as the young white population. The woodcutters made up of black and white sharecroppers had an extremely difficult struggle. They sold their production to the paper companies under marginal conditions. They financed their trucks and their equipment through the companies similar to the same old system of sharecropping, so that after a few years their loans and interest were exorbitant and were under the nominal control of the companies due to their indebtedness.

Simmons and a few other sharecroppers decided to band together in order to obtain more equitable conditions from the companies including life and accident insurance for this dangerous work. It could have been the beginning of a new era in the south. I went to Tuscaloosa to meet James; I felt there was an important film to be made.

I made several trips to Alabama in order to understand the operation of the Woodcutters Cooperative. I soon be came aware of a serious split in the organization. In addition to the sharecroppers, there was a small group of civil rights activists; Bob Zellner and others who I felt were very disruptive. They were too impetuous and Stalinist in technique. They ganged up on Simmons who had his flaws, which were also a part of the life style they were trying to change. They accused him of racism, which was true but exaggerated. They seemed to want to ruin the organization rather than modify it. It looked like adolescent extremism except they seemed more intelligent than that. I began to suspect that they were FBI infiltrators. That was the time when the FBI was heavily infiltrating the civil rights movements and other left wing and radical organizations. Martin Luther had been assassinated; many attempts had been made on the life of Castro.

The FBI had infiltrated SNNC, the Black Panthers, the Urban League, and the NACCP bringing many of them to ruin. It was also the time of the assassination of Eduardo Mondlane. There was a connection between all these events. There was a war going on all over the globe, the Cold War and these events were some of its tentacles. In any case what J. Edgar Hoover, the CIA and the whole array of right wing elements in Congress and around the country eliminated much genuine protest. It was a system; it wasn't totalitarian but it was destructive. It worked by media control, and establishment manipulation. It was a new version of Fascism, which I then labeled Madison Avenue Fascism. This period from the rise of McCarthyism, and the onslaught of right wing organizations with the support of Hoover was the American Inquisition and needs further study. I feel sure it led to the downfall of many progressive institutions and the unraveling of the democratic fabric of America.

I eventually made the film Woodcutters of the Deep South but during the time of production I had the uncanny feeling that the organization was being sabotaged. Woodcutters was the last of my low, low budget films that I produced for distribution by Impact Films, because it was enormous work and little reward. It came close to succeeding but it needed more support and promotion. Some financing from educational TV could have done the trick like some of the British, French and German Filmmakers achieved with their TV stations. At that point I went back to film making with greater budgets and aimed to obtain some commercial distribution. [Further research via the Freedom of Information act needed regarding the infiltration of the FBI into civil rights, anti-war institutions and other opposition organizations.]