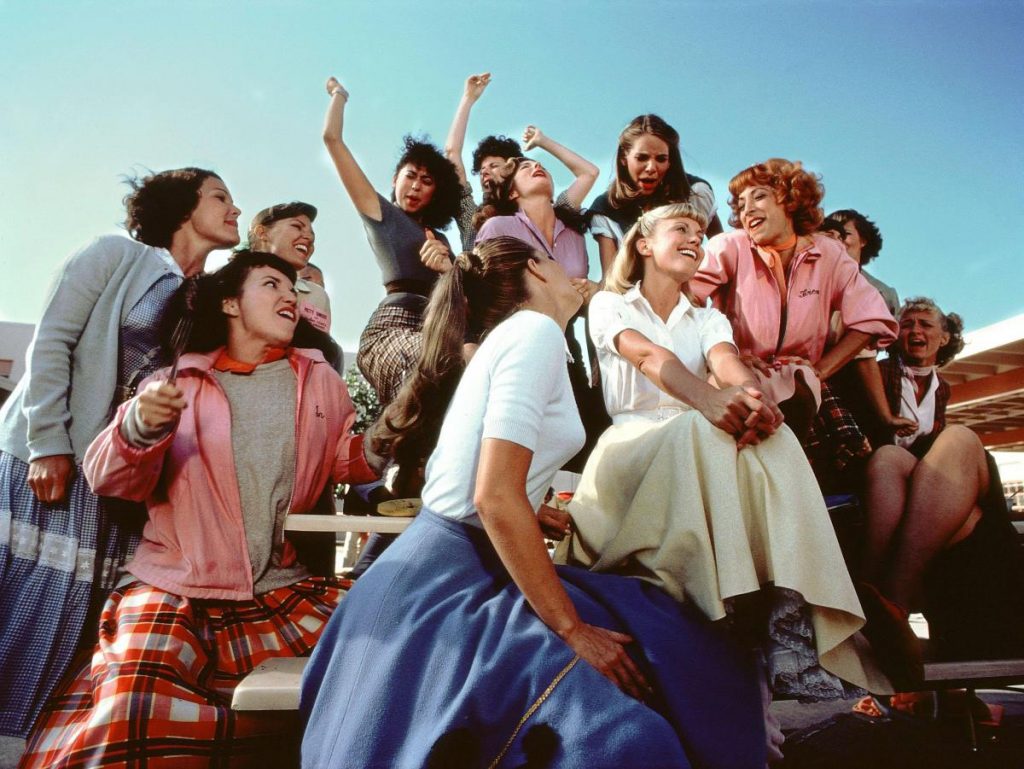 We know all the songs, we want all the costumes, we still join in to watch this classic. To close this year’s Cinema Ritrovato Film Festival in Piazza Maggiore, we are invited to a screening of Grease. When it came out it hit fast and globally, making it the movie musical with the highest box office success to this day. Much like Singing in the rain, Grease is one of those movies we hear people refer to as “I don’t really like musicals, but…”. Audiences are hopelessly devoted to it.

Part of the story is sad to tell, as it deals the conflict many teenagers face when they need to adapt different sides of their personality to fit in. Danny is busy maintaining the cool bad-boy persona he had built with his friends at school, that keeps him from being vulnerable and be with Sandy. Sandy instead makes the opposite evolution, in the adoption of a tougher attitude.

But let me tell you more about Grease, because much was changed from the original show. Jim Jacobs, one of the writers, based the show on people he knew in Chicago. Jacob’s cousin was the inspiration for Danny Zuko, and the reference was so clear that everybody in the neighborhood could point at the popular guy when the show came out. There were the Pink Ladies, whose catchy name came from pink (allegedly alcohol free) cocktails they drank after church. The show was much rawer, and so R-rated that it had to be cleaned up before it was presented to new audiences on Broadway.

Most of the actors in the movie were way too old to be in high school, mainly between the ages of 24 (as John Travolta) and 33 (Stockard Channing), this decision was partly made to cast John Travolta, whose performance in Saturday Night Fever the year before was largely appreciated, partly to avoid issues with scenes that involved adult content. Although it is at times obvious and funny to see, it makes many scenes more cartoonish and funny.

Alber Wolsky, the costume designer, went wild on the wardrobe. Starting out with a realistic approach, he then decided to step up with color variety and saturation, to go with the movie’s vibe, working on a wide spectrum from pastel circle skirts to Sandy’s iconic catsuit. This variety can also be enjoyed in the twenty-six songs present in the movie and in the vocal range of the performers, with Travolta’s glorious falsetto and Channing’s husky voice.

The camera follows choreographies in a dynamically, exploring the whole set and following the main characters, making it one of the best screen adaptations of musical history. It deserves its place in people’s dvd collections and its on-going success.