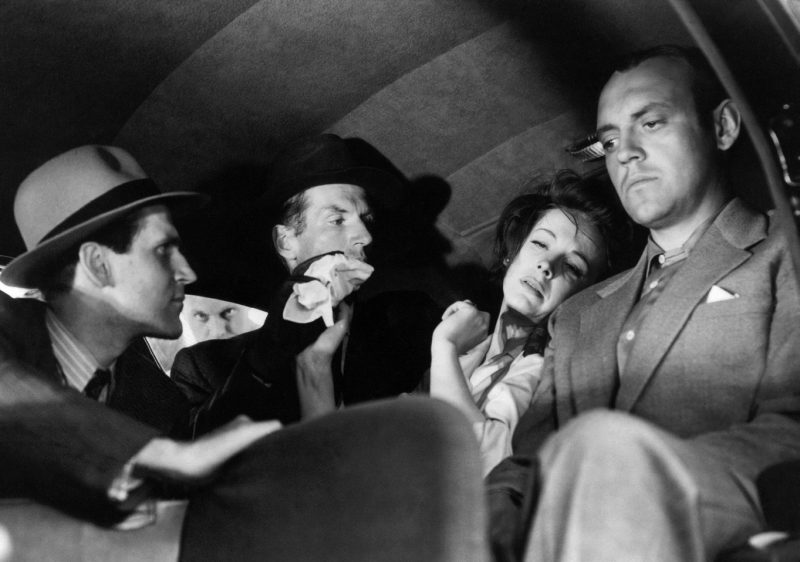 Youth, dreams and the Nordic summer dominated many of the films of Ingmar Bergman’s first half decade as a director (starting in 1945). Marriage hells were things still to come. They were glimpsed in a masterpiece called Törst (Thirst, 1949), but true ground was only found in a movie which is probably the least seen in the director’s career. Sånt händer inte här was made during the Cold War and soaked in its atmosphere; later, it disappeared under Bergman’s self-inflicted screening ban. The film has been consistently missing from the most complete Bergman retrospectives. The very beginning contains elements of a ‘black spell’. An airplane vanishes into the clouds. Images of Stockholm’s summer nights are oddly twisted by views of Ulf Palme in the back seat of a car. We know that he is carrying a false passport.

The film noir ambience is perfect in lighting, framing and an expressive expressionlessness. The Swedish national hymn is heard on the radio. The viewer realizes that he is being immersed in the frantic, vapid and cruel political reality of the early 1950s. A familiar account of a relationship evolves in an unfamiliar political context. We are facing a truth about a marriage that is not what it seems. Nor is Sweden. The film climaxes in a scene in which the wife stabs her husband with a stab in the neck, ‘deservedly’, from the viewer’s standpoint. The film is full of dense moments, Nordic noir at its best: transporting a corpse in a small cart (almost like a baby carriage) through a theatre rehearsal, Ulf Palme’s life ending in his fall from the balcony of the roof of the Katarina Lift, general images of guilt and nightmares. It all fits easily into Bergman’s stylistic family tree with its strong connections to the dark tradition of French cinema of the 1930s (Julien Duvivier, Marcel Carné). The tone is also familiar from many contemporary thrillers such as George Seaton’s The Big Lift and Elia Kazan’s Man on a Tightrope, but Bergman’s vision is more exciting than theirs. The closest contemporary counterpart might be Thorold Dickinson’s Secret People, which, however, avoids Cold War overtones and focuses on traditional terrorism. Among the expected bravura set-pieces in films of this type is a sequence in a movie theater (cf. Alfred Hitchcock’s Sabotage and John Huston’s Across the Pacific).

Bergman includes one as well: Donald Duck is being screened in the cinema while in the back room Signe Hasso, suspected of being an informer, is attending a refugee meeting. What is the country and what is the situation where shadowy forces of darkness emerge to operate in cozy Stockholm? The state is called Liquidatzia, but in true Swedish it is of course the Soviet Union – more specifically one of the Baltic countries. We meet Baltic emigrants first in a happy mood at a wedding and later at a strait-laced meeting where one of them is exposed as a traitor. He is not the only suspect who will lose his life. Also, the name of a ship seen in the film is a play on words: read backwards, it carries the name of the Communist newspaper “Ny Dag” [New Day] (“Nydag Kominform”…). Viewed through the prism of the Cold War, a certain primordial frenzy seizes this account of Sweden.

The film functions largely like a silent movie. Since there is no common language and since so much of the silent communication is illusory anyway, a tormented, uncanny and alienated Bergmanian community appears once again, merging with a synthetic geography, its non-citizens doomed to an incurable loneliness as they do in Thirst, Silence (1962) and Shame (1968). Life is absurd, a quest for something better is meaningless, and although the ‘main couple’ get one another, the severe mood never eases up. The couple consists of a policeman and Signe Hasso, who has killed her husband the night before. The promise of a harmonious, ideal home (Folkhemmet) for them can already be glimpsed, but the soul is black.

The problematics of guilt can be compared with the finales of several Hitchcock films (Blackmail, Sabotage), and even his later works such as Torn Curtain or Topaz, which transcend their undistinguished reputations. The cast of characters is largely unpleasant. Besides apathetic and gloomy emigrants (most of whom speak in pathetic accents), there are several mockingly or sarcastically sketched characters: a drunken doctor, a double-faced policeman chasing Signe Hasso. To top it off, the only human relationship which has seemed harmonious – displayed in the wedding as beautiful folklore – turns out to be a grotesque bluff. The vision is not simplistic, however. The man exposed as an informer has an important message: “this is a great moment for you smug people, how easy it is for you in a country like this… easier than for us who have experienced the torture chambers”. Bergman avoids the mechanical black-and-white visions of American Cold War films. I cannot agree with his obsession that this film should not be screened in public.

Like Billy Wilder’s One, Two, Three ten years later, this work delivers blows freely in every direction. Idealism or purity of motivation is out of the question for all the characters. The conversation between the policeman and Palme proceeds by blows: as consciousness fades, the Summer Hymn is playing (“Den blomstertid nu kommer”)… There is a constant current of humour in the film. It may lack focus and even intensity, noticeable if one’s thoughts stray to Bergman’s other work. The restrictions of genre filmmaking do not always fit an individualistic director. The character played by Ulf Palme is a Bergmanian anti-hero in the grip of the Cold War, a suffering ‘man between’, suicidal, tortured. He has turned callous and cynical in a way similar to the characters of Clouzot’s best films. He has been ‘good’, now he is ‘bad’. His cynical consciousness and experience – like Dostoevskij, he has been condemned to death – are the basis of a fatal hubris: “I know everything about humanity”. In each revolution the black element wins: the policemen, the murderers, the criminals… We are of course discussing a state of world affairs which is ‘objectively’ inflamed, but from Bergman’s standpoint it also provides an opportunity to sketch a situation in which cold-blooded murder – the finale of a marriage – is a logical development in the barometer of relationships.